Connecting an MP3 Player &c to a Gram Socket

Many old radios, including some transistor ones, have sockets labelled either "Gram" or "PU" which were originally intended to connect a gramophone through.  These days they can be utilised to connect an MP3 player or digital radio.

To do this you need to make a lead like this:- 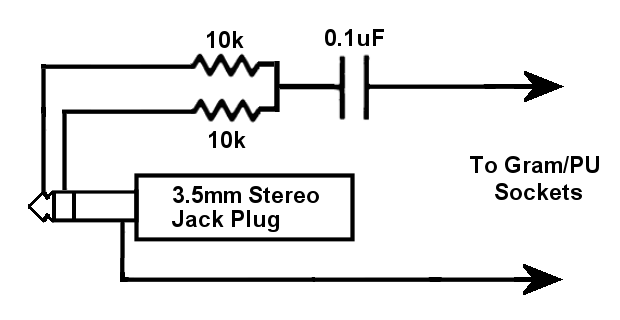 The plug for the MP3 player is a 3.5mm Stereo Jack Plug, sometimes called a Three-Pole one.

The two resistors mix the stereo signal to mono.  The capacitor is a safety feature as if the radio developed a fault which allowed the HT to get to the Gram socket this would block it before it could get to the MP3 player.

The resistors only need to be low power types and can usually be fitted inside the jack plug.  Personally I don't bother with the capacitor as the type of fault detailed above is unlikely to occur and the sorts of cheap MP3 player I use I regard as expendable.

The main difficulty is finding plugs to go into the radio.  The correct things are "Wander Plugs" but these are hard to find.  A good substitute is a phono (RCA) plug with the outer ring cut off.  Sometimes the pin needs flattening a bit to ensure a good connection.