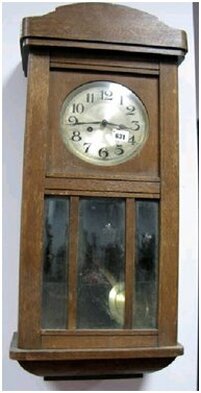 I bought this clock in a local auction.

It worked as was but I gave the movement a partial clean as I wanted to take it out while I did the case up anyway. The suspension spring had previously been bodged up but it didn't seem to effect its operation. 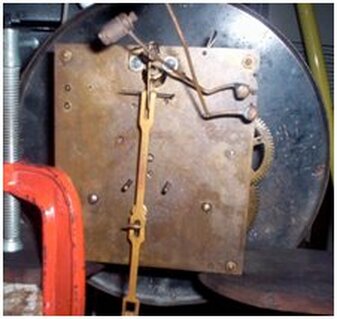 All a 'Partial Clean' involves is taking the escapement off and allowing the movement to run down in petrol. I don't have access to that so used kerosene.

After allowing it to thoroughly dry I oiled it using proper clock oil applied with a sewing needle with the point cut off.

While waiting for the movement to dry attention turned to the case. I had intended to strip and French polish it but after getting it home I thought that the original finish was in good enough condition to salvage.

It looked much better after just a coat of linseed oil rubbed in with a pan scrubber.

The only woodwork needed was repairing some loose veneer on the base which was in danger of snagging on the duster while polishing it. Due to the shape clamping it would be challenging to put it mildly. It also seemed too springy to secure with tape.

I tried putting the iron on it in the hope it would re-stick with the original glue but it didn't, maybe it had previously been repaired with PVA or the like. I therefore cut some paper-thin slivers from a hot-melt glue stick and put them between the veneer and wood and clapped the iron on top and this worked very well indeed.

After that the case came up very nicely with a couple of coats of wax.

I didn't want to end up with a toffee apple and as there are marks on the face, about which I can do nothing, making the rest look too good would make these stand out all the more.

I'm certainly happy with the result. 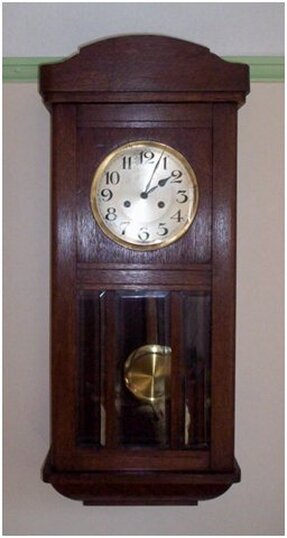