Tenon Saw Restoration
﻿
I bought this tenon saw off e-Bay.  When it arrived it was obvious that it had never been of the highest quality; there is a maker's name on the blade but it's too worn to decipher.  It looked in good condition though, the only problem being that the handle was loose.  This wasn't held on with screws but some crude two part rivets. 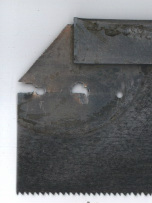 When I took the handle off it looked suspiciously like they were just bludgeoned through the plate as the holes were as ragged as hell and there was a crack in it.

I thought it wise to drill a hole at the end of the crack to stop it spreading. I found the steel was far too hard to drill, which I regarded as a good thing. I made the hole with a diamond burr in my dremmal.
The finish on the handle wasn't very good so I re-did it with Van Dyke Crystals and shellac.

When I put it back together I wasn't at all surprised to find that the original fixings were useless as they couldn't be tightened enough.

Proper saw screws seem somewhat difficult to get.  There are several places in America that have them but they are hideously expensive even before allowing for the postage costs.  The only place I could find here were Flinn-Garlick. These were very reasonably priced but they only do solid brass or brass plated and, as this saw has a steel back, I wanted matching steel screws.  I therefore set to and made my own.
After that it just needed sharpening and now performs very nicely.  The hole in the handle is only big enough to get three fingers in which has the happy effect of forcing me to hold it properly, ie index finger pointing along the line of the blade.

I haven't gone into details of sharpening as this information is already available by people far better qualified than I.  I would recommend these videos:-and this written guide:-All I will add is that there's no need to get overly hung-up on the angles: a routine sharpening is only re-creating what's already there.  It's if you are deliberately changing the tooth geometry of dealing with a badly abused saw that you have to really think about them.  It should also be kept in mind that saw isn't going into a beauty competition.  Obviously you want to do the best job you can and get the teeth as similar to each other as possible but it's the slight imperfections that make hand-filed saws better than machine-cut ones where every tooth is identical.

Saw Sets are common on e-Bay and files may be obtained from:-